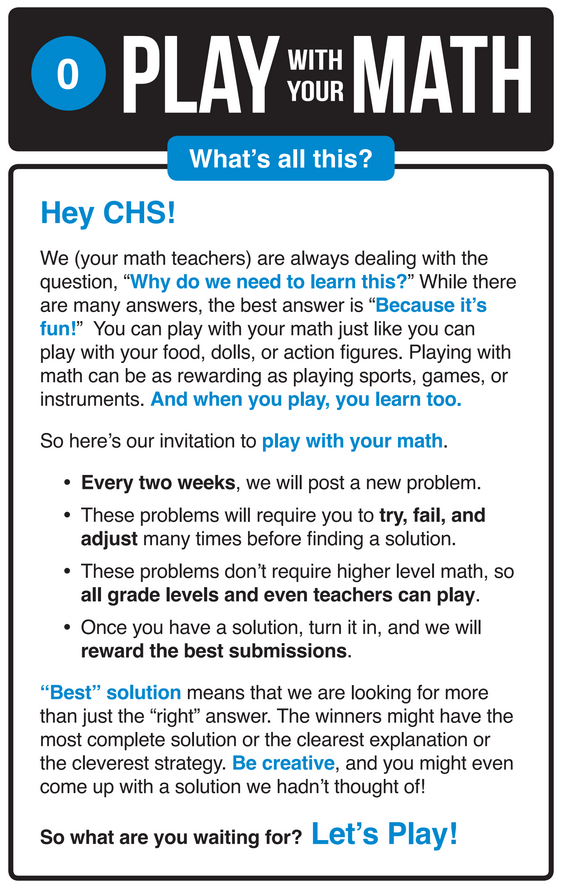 Step 1: New Year, New Culture
Entering my second year of teaching, I had no idea what our department culture would be like. We lost several seasoned veteran teachers and replaced them with teachers who were somehow even younger than me. I had discovered math-ed blogs over the summer, and throughout the fall, our conversations became more and more influenced by posts of the MTBOS. And then we took things one step further: a few of us started doing math together. We started sharing cool problems with each other, working on them together, and comparing our solutions. The Mathematics Teacher’s calendar problems was our main source of material along with Math Arguments 180. The problem that really stands out in my memory is Breaking Twenty-Five – a problem that traced back to Dan Meyer and Malcolm Swan as well. We had a blast playing around with that problem.

Step 2: A Great Idea
One of my colleagues – Ms. Yu – was inspired, and wanted to share the fun we were having with her students. She made up a poster, and emailed me a copy. The poster had the “Breaking Twenty-Five” problem, some great stuff about how she wanted the “best” answer and not the “right” answer, and logistical stuff about due dates, extra credit, etc. But what struck me was this passage:

“When I was a kid, my mom always told me to stop playing with my food. I didn’t really understand why—I learned so much by playing with my food! For example, I learned that mixing green and red ketchup doesn’t get you purple ketchup. And that cheese doesn’t go well with most Chinese foods except crab rangoon. And aluminum foil in the microwave, well… let’s just say that when you play, you learn.”

(Another great example of intellectual vindication.)

Step 3: Blow It Up
I saw the poster, and I was so impressed that I wanted in. I suggested we make this a department wide project, and we decided to make a new problem every couple of weeks with posters in our classrooms and in the hallway. I imagined our students like little Will Huntings, stopping in the hallway because they saw a cool math problem and unable to walk by without trying it out first. 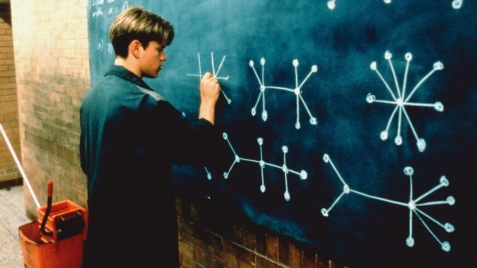 Step 4: Rollout
We spent most of February break working on this project – finding and trying really awesome problems, discussing the criteria for a good “Play” problem (the entry point is the key), and working on the design. In the process, I learned a ton about accessibility, engagement, collaboration, and how to use InDesign. All of the planning and preparation went better than I could have ever hoped, and after having a few colleagues provide feedback, we launched Play With Your Math at the beginning of March.

Stay tuned to hear about how it went.