7. Letting my classwork policy evolve
In the first quarter, I graded almost all of the classwork that I had my students do. It was exhausting and pointless. I was only grading for completion or “effort,” and my standards were low for both. In quarters two and three, I tried to collect a random sampling, and even though I was collecting less, students revolted. My timing was always unfair; of course I wasn’t collecting it this time. I realized something crazy was happening – my students were upset that I wasn’t collecting and grading their classwork. But somebody was also upset when I collected it. I made the wrong choice either way. So I gave up the choice. In the fourth quarter, students decided when to turn in classwork, as long as they did it five times. They were encouraged to turn in classwork when they were proud of it, and I provided stamps for them to self-congratulate. The response was overwhelmingly positive. 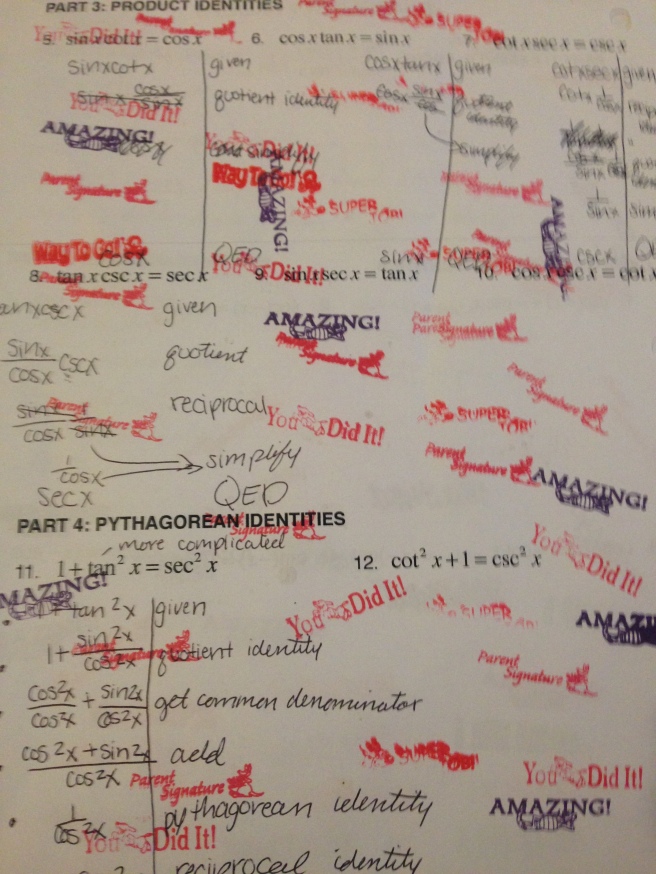 More important than whether or not this is an optimal classwork policy, the experience was rewarding because it emerged organically over time.

6. Getting rid of nightly homework
Nightly homework works in some classes. I felt like it worked when I was a student, but it has not worked for me as a teacher at my current school. I was lucky to get 60% completion in an honors class and 40% in college prep. The only students who were doing the homework were the ones who didn’t need it, and most of the students who weren’t doing it had decent excuses like jobs and family responsibilities. As I got lazy and assigned less homework, I noticed that I didn’t miss it. When we needed to practice a skill, we found time in class. And inspired by a colleague, I switched to semi-weekly problem sets that provided opportunities for creative problem solving. I try to make the problem sets meaningful and interesting so that students will (almost) want to do it.

5. Establishing “Do Now” routines
I aim to make the most of the first five minutes of class. During my first year teaching, I called the warm up “Problem of the Day,” and while the problems were all over the place, the branding was the same every day. In year two, each day of the week had its own theme and format, and I loved how it kept things varied and allowed me to focus on different aspects of mathematical thinking. I’m changing the routines for this year, but these were the routines for last year:

4. Starting Philosophy Club
In addition to math, I majored in philosophy in college. This year, we started a philosophy club, and it was really fun and interesting to talk to my students about non-math topics. I also appreciated interacting with students without worrying about time or classroom management. Over the course of the year we settled on a few themes:

3. Everything about Play With Your Math

2. Switching to Standards Based Grading
This probably deserves its own post at some point. In short, I loved how it lowered the math-anxiety in my classroom, earned the universal approval of my students, provided data that I could use to make remediation decisions, encouraged a growth mindset, and gave students an excuse to hang out in my room before and after school.

1. Putting my ideas out there
In my first year of teaching, I worked in near isolation. In year two, there were two experiences that forced me to show my work to another teacher.

In both cases, I realized that if I put my ideas out there, one of two things happens. If it’s a good idea, someone steals it and we both get better. If it’s a not-so-good idea, I get feedback on how to improve it. I think those experiences are a big reason why I’m blogging. I gained a lot by sharing my ideas with 2-3 people, and I hope to learn a lot from sharing my thoughts with the MTBoS.