A few months ago, I went to my first math ed conference: the NCTM Annual Conference, which was here in Boston this year. I really enjoyed myself, and I think I got a lot out of it. One session in particular gave me the final push I needed to change my teaching in three significant ways. That session was: Improving Student Success by Spiraling Activity-Based Learning with Bruce McLaurin and Alex Overwijk. I went to a lot of smart and interesting sessions at NCTM, but I think that this session had such a major impact on me because of a sort of synchronization between 1) their experiences and 2) my ongoing struggles. Below, I try to explain why I was able to actually act on what Bruce and Alex were talking about, and what these three changes looked like in my classroom this past spring.

I was primed for this change.
I have always struggled with how to assign seats. I want students to be happy and buy into the seating arrangements. I often let students choose their own seats, but that causes some other problems: kids can be cruel and exclude their peers, and working with your friends is a recipe for distraction. However, my biggest problem is that no seating arrangement works for the entire year – things just get stale after a while. I’ve tried to assign new seats periodically to shake things up. Sometimes, I keep some of the kids who I know are friends together, and other times, I’ve tried randomly assigning seats. But inevitably, kids tell me: “I can’t work with him/her” or “I can’t see from here,” and whatever I had planned falls apart.

This session gave me the final push.
At some point during the session, this slide went up: 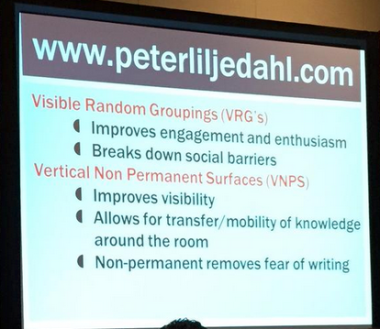 And something clicked. Visible Random Groupings are a simple and systematic solution, and I tried it for the rest of the school year. Everyday, as students came into class, I held out a partial deck of cards. Students choose one at random, went to the corresponding group, and got to work on the warm up activity. Because students are picking their own card, they believe me when I claim the seats are random; I think that is what’s meant by “visible.” While I have randomly assigned seats before, doing it everyday has been a revelation. If they don’t like it, I tell them, “Too bad. Maybe it’ll be more to your liking tomorrow.”

After about three weeks, I sought some student feedback, and it was mostly positive:

“I like the new do now system and seating arrangements. It forces us to work with new people everyday which means new ideas everyday.”

“The way we start class now is a good way for everyone to meet each other.”

“I like your changes because you get placed with different people and you get to work with them. It’s better than talking to your friends all class.”

“I think daily seat changes were good because they didn’t let you rely on one person to do the work.”

I was primed for this change.
My school has a surplus of small individual whiteboards. During my first year of teaching, these were a game changer. Using a whiteboard instead of a handout was like a magical injection of engagement … for about 20 minutes. They sparked some new ideas for lessons, but fundamentally, individual whiteboards are good for individual work. I had read about how easy it is to get big whiteboards from Home Depot or Lowe’s several times: from Andrew Stadel, Nathan Kraft, Fawn Nguyen. It sounded like a good idea, but it seemed like a lot of work for a meager change.

This session gave me the final push.
This session was first thing in the morning, and it started with a notice/wonder on some chart paper spread around the room. I took the bait and got up and jotted down some ideas. It helped wake me up and got me talking to some of the other people at the session. Later, I saw myself in action on twitter:

If that had been all, I would not have given it a second thought. But later in the session, Alex mentioned that his students are standing about 80% of the time! That statistic blew me away. It reminded me of grad school and how the phys ed teachers always harped on how all the research says that our students do too much sitting. While I agree with the sentiment, I never had any good ideas on how to execute it. I’ve tried stations activities, but asking students to get up and move to another table during class was like pulling teeth.

That statistic – vertical 80% of the time – convinced me to try this. The wonderful Ms. Harding drove me to Home Depot, and they cut the boards in half for me. I attached five whiteboards to the walls of my classroom, and it was transformative.

Now, each table gets their own whiteboard with the day’s warm up activity taped to it, and the increase in engagement and collaboration has been both significant and obvious.

An example of Estimation 180:

An example of Which One Doesn’t Belong: A Mobile from from solveme.edc.org: 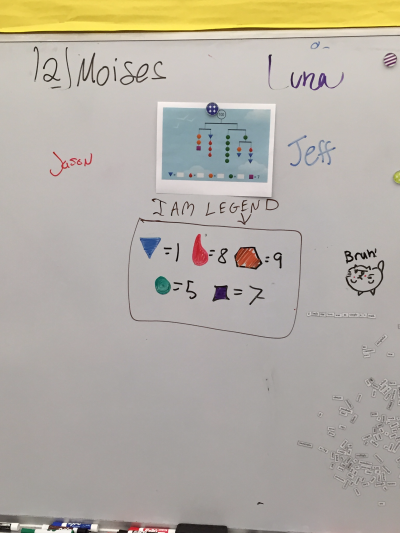 An example of Notice/Wonder:

An example of 3 Reads:

I was primed for this change.
I was initially drawn to this session by the phrase “by eliminating units” in the session description. In my first two years of teaching, I kept looking for someone to help me understand what a “unit” is and how long/short or broad/specific they are supposed to be. At different times, I have been criticized for having units that are too short and for having units that are too long. I have been able to deduce that a unit should be between two weeks and two months long, but that still leaves a pretty wide range. For example, “sine/cosine graphs” feels like a discrete topic, but does that mean it is a unit or is it just one part of a larger “periodic functions” unit, which would also contain application/modeling problems and maybe even tan/sec/csc/cot, inverse functions, or the unit circle? Or maybe all of this is part of a giant Trigonometry unit that also includes  SOHCAHTOA, identities/proofs, and the laws of sines and cosines? How do we benefit from breaking all of this content into units, and how do we make sure that we don’t lose the connections between the units by creating a distinction?

This session gave me the final push.
The session started with a Notice/Wonder about this image.

I was a little taken aback by the onslaught of color (I’m colorblind), but I took some time to process and found this fascinating. This image shows two different ways to organize the same course: 1) by units, and 2) by activities. At the top, the course is organized into seven units. This course organization squishes all of the work on similar triangles into the first 1/7 of the course. The courses at my school are all organized by units.

The array with the colored circles shows how the same course could be organized by activities. Here, the activities and assessments are on the x-axis and the standards/objectives on the y-axis. Now similar triangles are spaced (i.e. spiraled) throughout the course, showing up in activities 1, 6, 14, 21, and 28. This session told the story of how and why Alex and Bruce shifted from a unit-based course to a spiraled, activity-based course. I love this structure: it feels more authentic and I bet they are seeing much better retention of content learning.

My school is committed to unit-based design, and I do not have the freedom to abandon units. We have relatively new year long plans (or “pacing guides” or “scopes and sequences” or whatever you want to call them) that outline the units into which we need to divide each course, and the standards that compose each unit. So while I love the changes that Alex and Bruce have made in their course, I didn’t know how I could bring that work into my classroom.

At the end of the session, I asked Alex if he had any advice. He suggested that I could still implement activities within my course’s units. Alex used “activity” to mean something different from “lesson.” While lessons teach content, activities teach content by doing mathematics, which is a perfect instructional pairing with my school’s performance task initiative.

I have tried a variety of activities and 3 acts in the past, but I was mostly trying to use them as a hook beforehand or an application after-the-fact – I did not realize that they could be the driving force for the entire instructional sequence. I had just adapted Ferris Wheel for a performance task, and I tried to build on that by formalizing our study of periodic functions with an activity: Dan Meyer’s Scrambler 3 Act. Here’s a quick summary of what that looked like.

1) We started with the Act 1 video and a notice/wonder on the whiteboards: 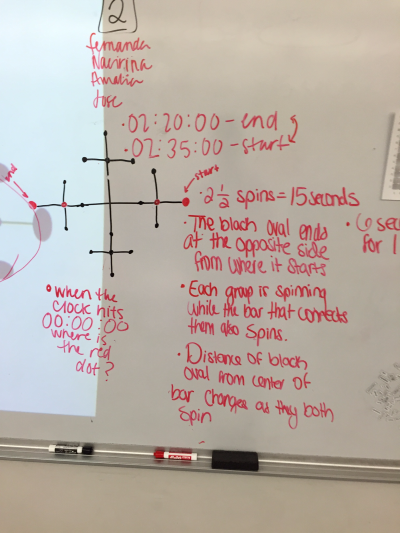 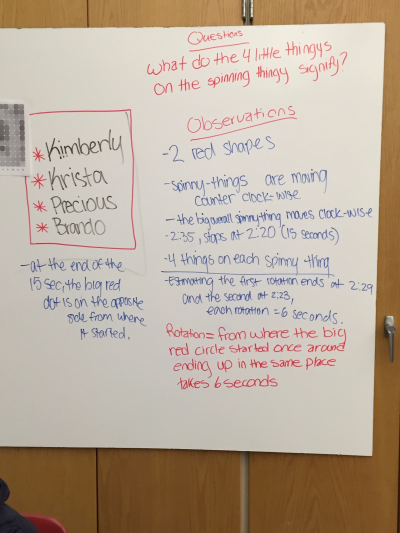 2) Then we came to a consensus about what question we were going to try to solve: How high is the red oval when the clock hits 0?

3) I challenged students to figure out the answer without using trigonometry. We had been able to do that with the ferris wheel, but not this time. Some groups were able to figure out that it would be somewhere in the first quadrant, but not exactly how high. We NEEDED trigonometry and to write some functions.

4) So we paused the scrambler, and we focused on developing content knowledge. I gave each group a graph of a sine/cosine function, and asked them to write an equation for it. Our previous knowledge helped us find the parent function, amplitude, and midline, but students struggled to turn the period into the “b-value.” As I circulated, I gave groups some hints, and they started to get a feel for why and how to use the period=2pi/b formula. 5) After another example, we came together as a class and wrote equations for the movement of the red circle and the red oval using the Act 2 video. Temporarily, we ignored the midline. To find the equations, we had to apply the practice and learning we had just done.

6) Finally, we discussed how to combine these two functions and how the midline was involved. This discussion required clarifying and being more precise about what “h” meant in each equation. By the way, this was one of my favorite discussions of the year. Typically, one student has the insight that the midline of one function is the other function, and I love pushing them to share that insight with their peers. I loved how one activity was able to be:

Now to figure out how to repeat this process with other activities/content/courses.